In comparison to the previous artist I reviewed, I found another one that is more contemporary and creates artworks using appropriation and a mixture of Aboriginal paintings techniques as well as Western imagery to bring forth his position on Identity. This artist is Lin Onus who was born in Melbourne 1948. Unlike Emily he was exposed from a young age to the art world as he worked in his fathers arts and crafts shop. It wasn't until later in his life did he embrace his Aboriginal heritage by travelling to an Aborignal community where he met a man named Jack Wunuwun in Maningrida. Jack was concerned that there wasn't enough awareness or exposure to Indigenous art in the South and therefore adopted Lin as a son and began to teach him their culture and traditions. In his art Lin combines Western and Aboriginal imagery to play with stereotypes and art history. This technique is displayed in his piece 'Michael and I are jsut slipping down the pub for a minute' 1993 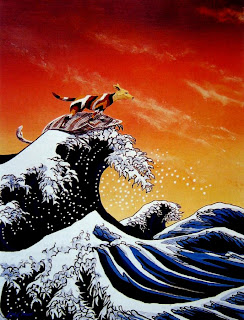 Lin Onus has appropriated from a few different sources in this image. Firstly the dog is created realistically - influenced by Western art, but the wave was originally from the Japanese artwork 'The Great Wave' by Hokusai in 1800. He has inlcuded tradiontal Aboriginal motifs over the dog and the stingray in which is surfs upon, also making reference to the popular Australian sport. He is combining different contexts surrounding art in order to express his own views on stereotyping and his Aborignal heritage but in a very light-hearted manner.
After looking at Emily in the previous post it is clear to see how Aboriginal art has developed through the years. Artists still appear to be using the techinques of the ancient Aboringal art but the context is moving from culture and spritiuality to their fight to find their Identity in a Western dominant society.
Posted by chantellesthoughts at 14:38